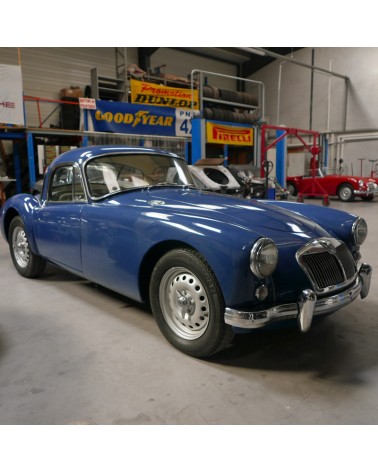 Introduced 1958 - 1960 Number built – 2,111 inc Coupe
The MGA Twin Cam was announced in 1958 and was the product of a lengthy and involved development but disappointingly it returned one of the shortest production runs that Abingdon had ever seen. This certainly makes the car somewhat a rarity with only 2111 cars being produced between early 1958 and early 1960. The twin cam was to utilise an engine that was never fitted to any other car.
It was Gerald Palmer who was a design engineer at the Cowley plant who originally set the wheels in motion for a twin cam conversion of the B series engine. A special light alloy cross-flow cylinder head carried twin overhead camshafts with valve operation via Coventry Climax style inverted bucket-type tappets.
The Chassis did differ slightly to that of the 1500 MGA and there were important changes to the brakes and wheels. In view of the 113 mph performance attainable, Dunlop 103/4" disc brakes were fitted both front and rear together with Dunlop centre lock disc wheels carrying Dunlop Road Speed tyres. Wire wheels were not available as an option.
Twin Cam badges that were fixed to the top bonnet surround adjacent to the air intake grille and on the boot lid below the MG Octagon that betrayed its identity
Problems with reliability very early on in its production life affected the sales of the Twin Cam quite markedly and despite its sparkling performance the car was regarded as a commercial failure due to its cost. These problems were attended to by Abingdon but only just before production ceased in mid 1959. In the short production life of two years only 2,111 examples were produced, 1,801 of which were roadsters. There is no doubt at the time, the Twin Cam was a car that Abingdon was not particularly proud of, but today the car quite rightly has its niche in the MG history book and is a much desired classic.
Engine: Four cylinder, in line, cast iron block, alloy head.
Capacity: 1588cc
Bore & Stroke: 75.39mm x 88.9mm
Main bearings: 3
Compression Ratio: 9.9:1 initially, then 8.3:1
Valve gear: Twin overhead camshafts with shim adjusted bucket tappets.
Carburation: Twin semi-downdraught 1 3/4” SUs
Power output: 108 bhp @ 6,700 rpm
Maximum Torque: 104 lbft @ 4,500 rpm
Transmission: Four speed manual gearbox with synchromesh on 2nd, 3rd and top.
Clutch: Borg and Beck dry plate.
Suspension: Front - independent by coil springs, wishbones and Armstrong lever arm dampers. Rear - Live rear axle, half elliptic leaf springs, Armstrong lever arm dampers.
Steering: Rack and pinion.
Wheels and tyres: Duniop pressed steel centre lock disc with 5.90-15 Dunlop cross ply tyres.
Brakes: Dunlop disc brakes front and rear 10.75" diameter discs.
Length: 13'0"
Width: 4'9.25"
Height: 4'2"
Wheelbase:7'10"
Performance: 0-60 mph; 9.1 secs
Maximum speed: 113 mph
Number built: 2,111 between 1958 and 1960
Price new: Roadster; £843. Coupe; £904

This YM3 Twin Cam Coupe was originally delivered to Finland and where it has been from new to the original owner. The car was delivered in November 1958 and was intended to drive in rallies. The car is in original condition, the car runs and drives really well and is one of the 310 limited coupes made All European taxes paid and ready to drive.