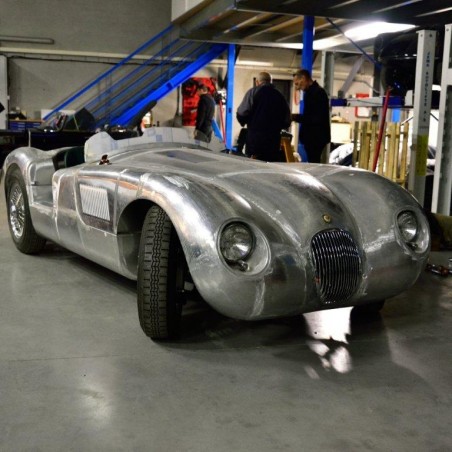 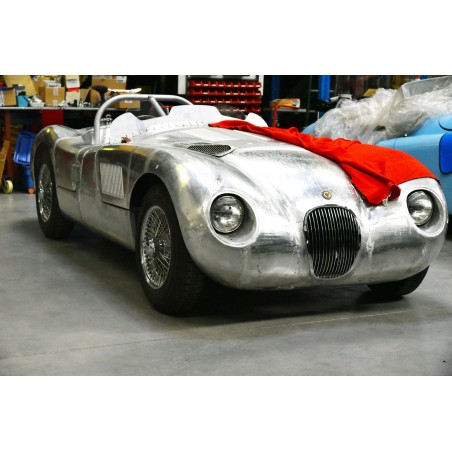 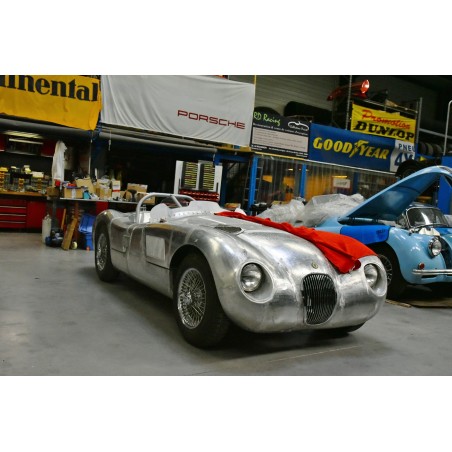 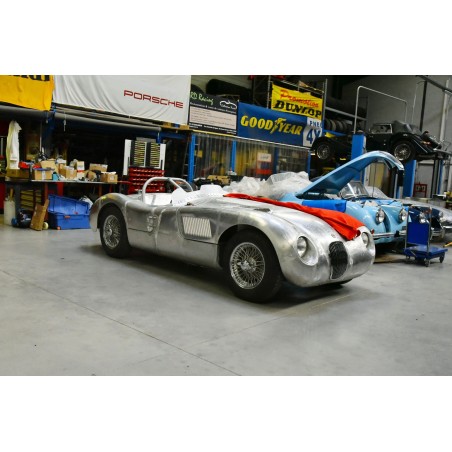 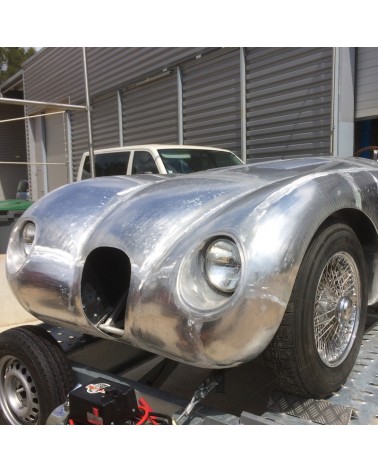 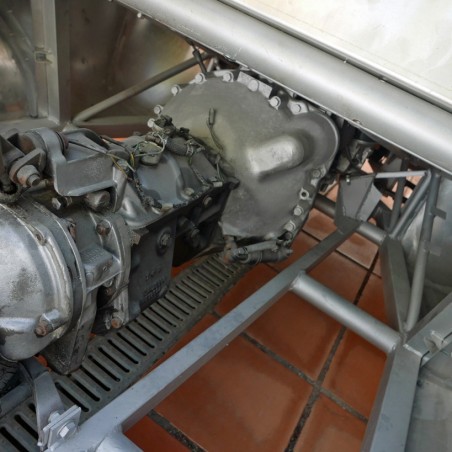 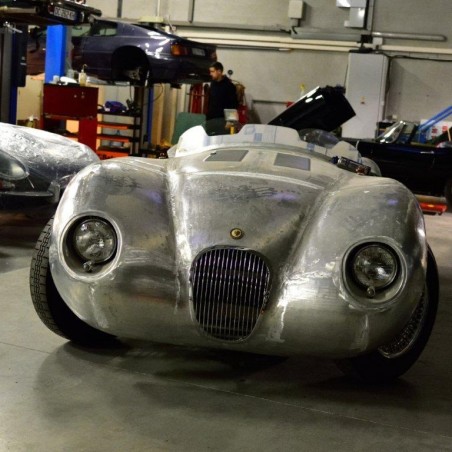 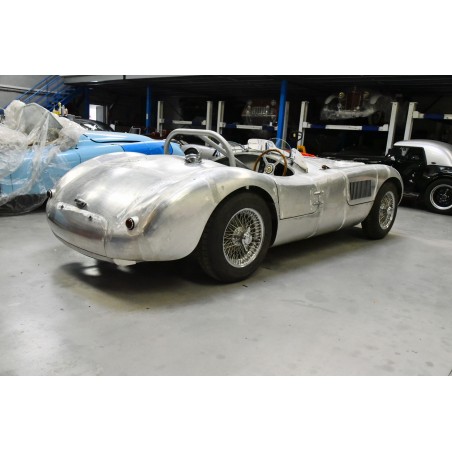 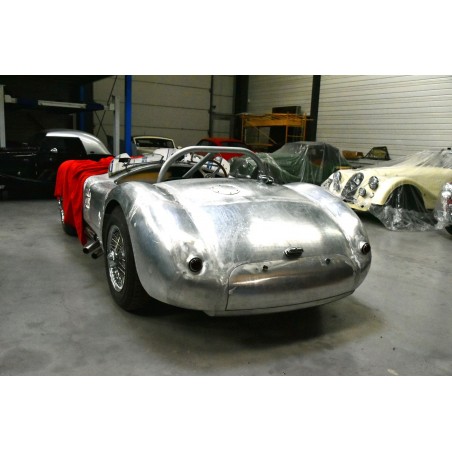 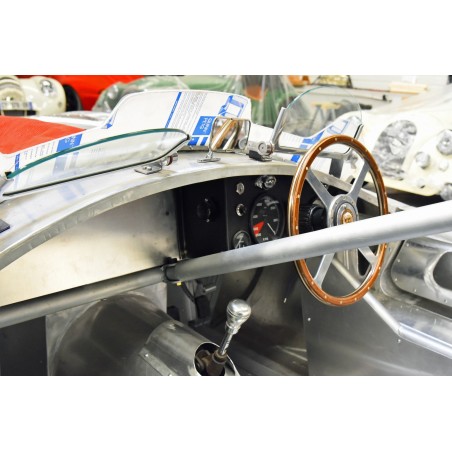 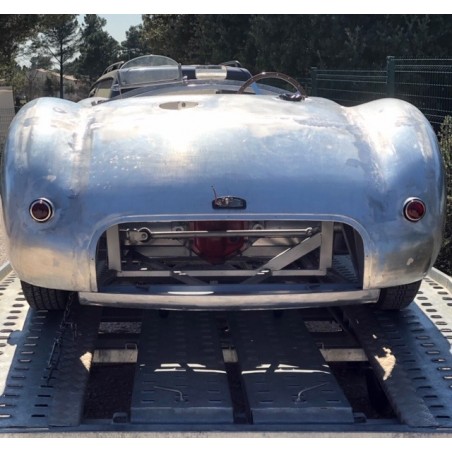 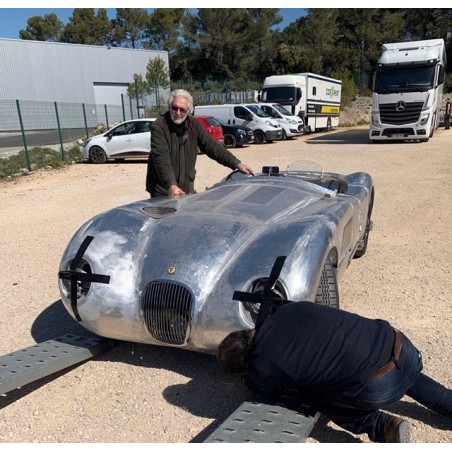 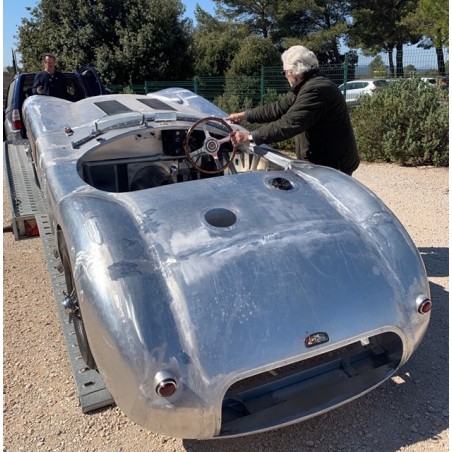 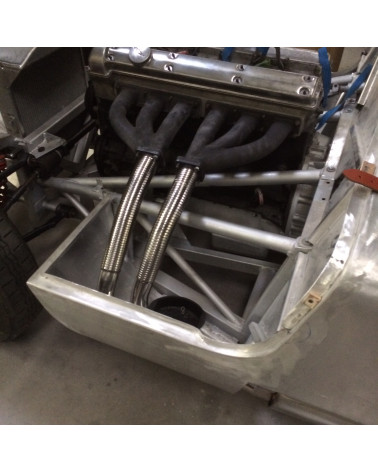 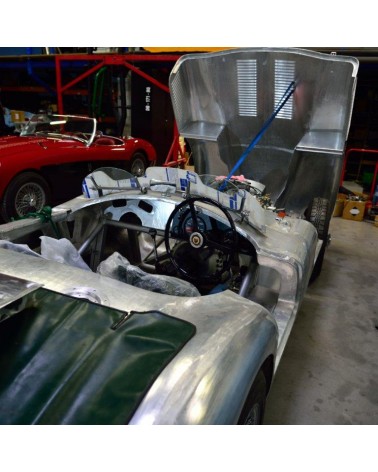 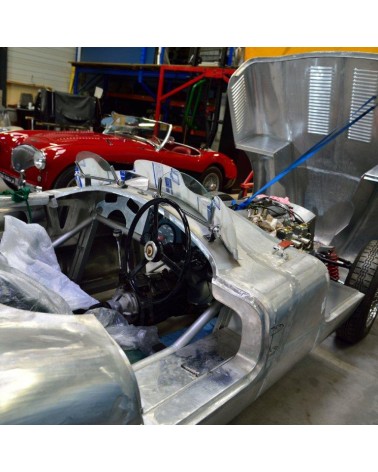 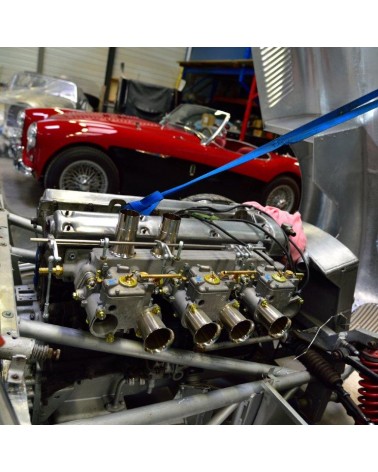 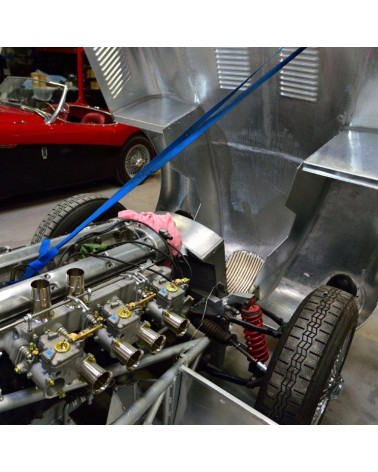 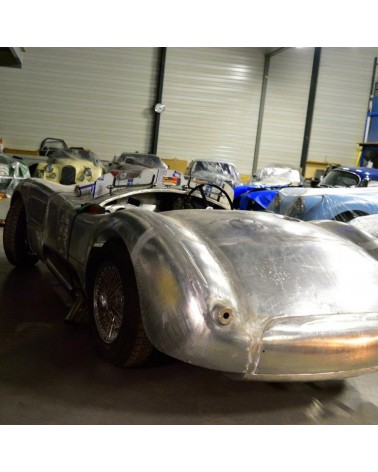 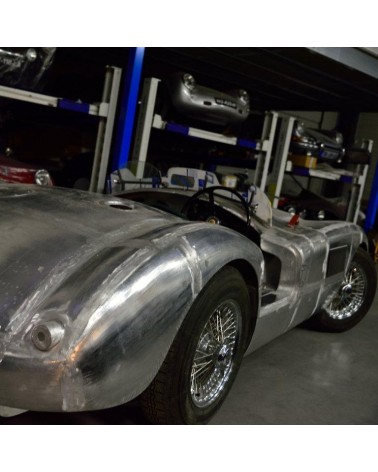 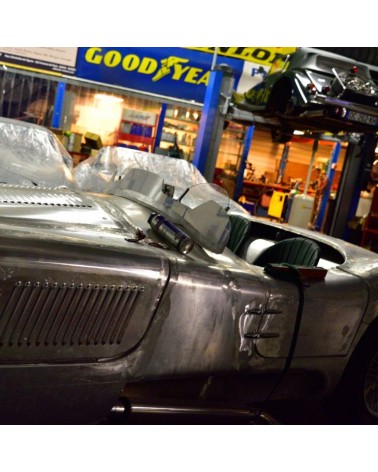 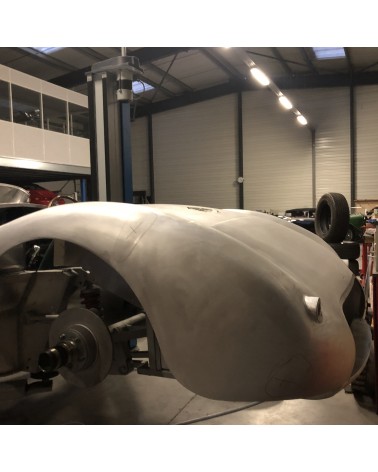 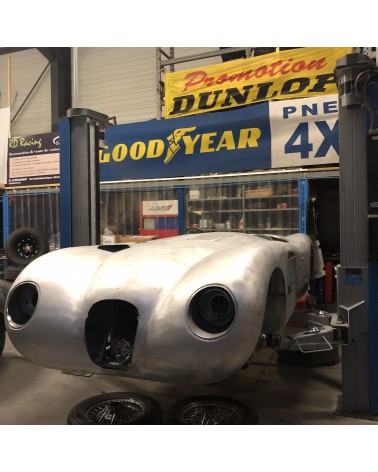 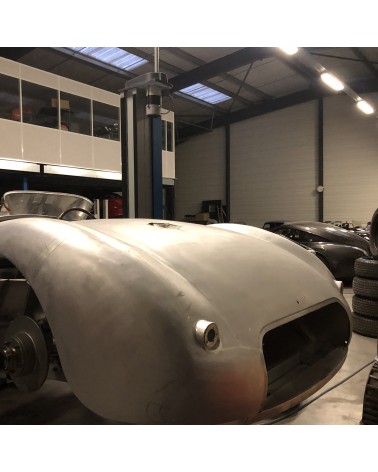 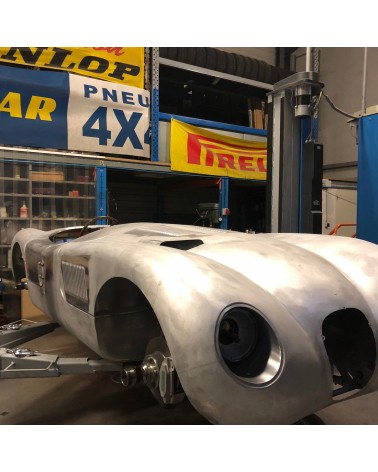 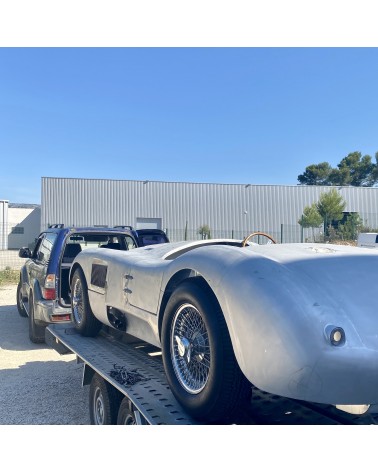 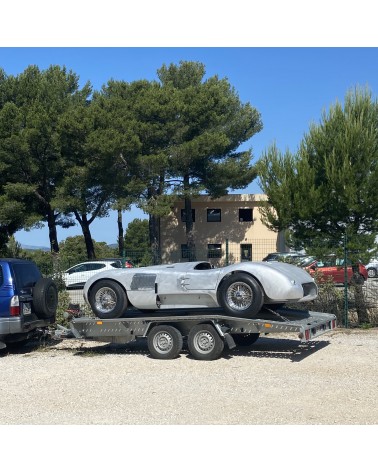 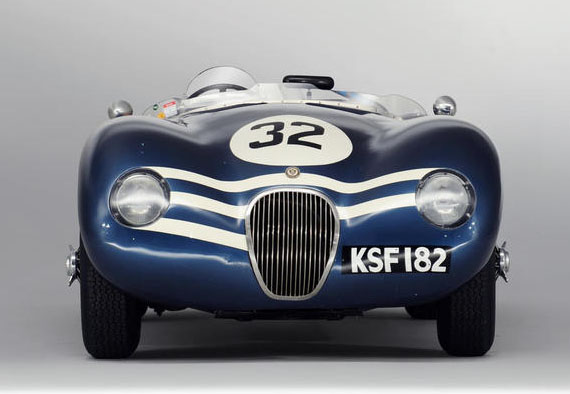 Jaguar C Type Lightweight.
From a PROTEUS frame, we make a copy of the lighter version of the C type of Le Mans. This is the Jaguar C-Type Lightweight Works, chassis No. XKC 052, Motor No. E 1055-9, sold $ 13.2 million in Monterey, lot 235, RM Auctions- by Sotheby's (former stable of Scotland) in August 2015 .
Bodywork ultrathin aluminum, struck by hand, three Weber 40 DCOE carburetors replace SU HD8, fully synchronized transmission with a reinforced clutch disc, a new definition of the rear axle elements, a tank aluminum fuel, lighter components saving weight and 4 disc brakes
After placing the right-hand (as originally) we decided to place the LHD. .

TYPE-C 24 HOURS OF LE MANS
Few sports-racing cars reached the legendary status of the Jaguar C-Type, which won the 24 Hours of Le Mans twice to the factory in Coventry, dominating all events in 1950 The Type-C began life as the famous XK120 roadster, which had caught everyone short in 1948 with his double cam shafts engine revolutionary head.
Several private customers bought XK120 and are supported by the factory at Le Mans 24 hours in 1950, and the car was remarkably competitive Leslie Johnson and won 4th place.
After following the event, Sir William Lyons founded Jaguar and Bill Heynes engineer was convinced that with a more aerodynamic design and lighter car preserving the mechanics of the XK120, slightly modified, was a strong chance to win the race.
Development work began immediately, starting with a new lightweight tubular chassis, one of the first uses of this technique for sports car construction. The rear suspension of the XK120 was redesigned with additional clamp supports and XK 3.4-liter engine received a new cylinder head, camshaft high lift, racing pistons, and a double non-muffled exhaust system , brought the engine to 200 horsepower. Most notable, however, was the great body of the new car: a conjunction of fluid aerodynamic curves and bulges designed by the designer of the house Jaguar Malcolm Sayer. The first three cars made by hand were conducted in just six weeks and are the first cars designed specifically for racing by Jaguar. The goal was to win Le Mans, which was done twice with these cars.
Initially known as decXK120C (C for competition), the C-Type made its debut at Le Mans in 1951 with a stable and cars sponsored by the factory. While two of the three cars entered were forced to retire with an oil leak problems, the car driven by Peter Walker and Peter Whitehead claimed victory, this is the first all-British car to win Le Mans for 20 years.
Jaguar not only won Le Mans, but it was done with flying colors, finishing 77 miles ahead of the second car and setting a number of records: fastest lap at 105.232 mph, speed record of 24 hours 93.495 mph, and the greatest distance covered in 24 hours at 2243.886 miles.
In 1952 24 hours of Le Mans were less successful for the plant, the three cars entered had to abandon because of problems that occurred on the cooling system. Given the dominance of Mercedes-Benz 300SL, Coventry engineers have realized the need to make some improvements to stay competitive for 1953.
Given the considerable triumph as determined by the 24-hour race in 1951, the factory decided to release a new model at the beginning of 1953 limited to 50 copies.
A number of improvements were made to the three cars, a super slim aluminum body, powerful three Weber carburetors replaced the SU HD8, a fully synchronized gearbox with a triple disc clutch, an additional top tether axle rear, and aviation-type fuel tank rubber and lighter components saving weight. More importantly, the cars were equipped for the first time in the 24 Hours of Le Mans first disc brakes. In 1953, the Type-C were the only cars so equipped with disc brakes. This difference had to be predominant for the results obtained in the race. 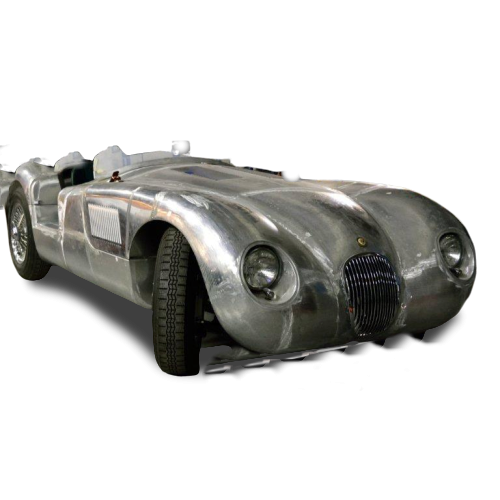 JAGUAR C-TYPE
Used
 Be the first to write your review!