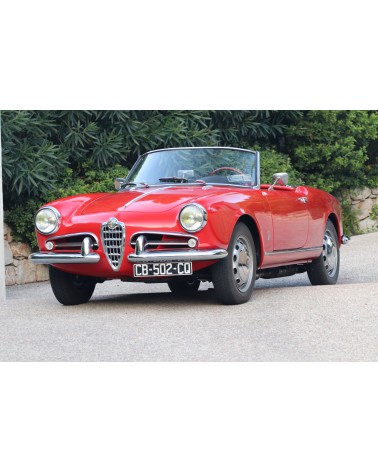 The Alfa Romeo Giulietta Spider is equipped with a front longitudinal four-cylinder in-line naturally aspirated engine developing a maximum torque of 113 Nm from 3500 rpm and a maximum power of 80 hp at 6500 rpm transmitted to the 15-inch rear wheels via a 4-speed manual gearbox.

In addition to the Berlina and Sprint, a two-seat Spider (convertible) version of the Giulietta was also produced. Designed and built by Pinin Farina, this smooth and attractive automobile was proof that Giulietta running gear was perfectly suited to sports cars. Although the Berlina was by far the most popular body style, small sedans are now very rare as they tended to lead a tougher life than Sprints and Spiders.

From 1956, Giulietta buyers could choose either a Sprint Veloce or a Spider Veloce in addition to the standard versions of the three main body styles. The Veloce models featured, among other engine modifications, twin Weber carburettors in place of the single Solex units of the standard versions, and they could rev up to 8,000 rpm. With virtually no external signals giving the extra power, the Veloces offered enormous fun in cars that were still relatively affordable and rugged.

The Giulietta was produced in two series, retroactively titled 750 and 101 in reference to the early digits used for part numbers associated with the vehicles.

Our car is therefore a TIPO 750 F PASSO CORTO from 1958 meaning that it is a version with the "SHORT CHASSIS" with the "VELOCE" engine of 80 hp with the 4-speed gearbox called "PORSCHE", of which only 1253 were produced.

This rarity extremely sought after by ALFA collectors comes out of 5 years of restoration!

It was completely dismantled and restored by its owner, an early ALFIST who knew all the intricacies of this model. It did not deviate from the origin and respected all the codes of the GIULIETTA SPIDER VELOCE 750 F.

All parts are original restored parts and not remanufactured! The WEBER carburettors are period originals, the transaxle engine are the correct ones.

This wonder is restored down to the smallest detail as if it left the factory in 1958.

We have the ALFA ROMEO CLASSIC identification certificate attesting that this car was built in December 1958 and sold in March 1959 by REGIE RENAULT.